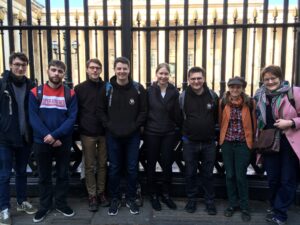 On Saturday 23 February a group of Ordinands from the College of the Resurrection, led by Dr Dorothea Bertschmann, visited London for the day. The group had two wonderful tours of the British Museum looking at Mesopotamia including the special exhibition on Ashurbanipal, a King who ruled the Assyrian Empire in what is now modern-day Mosul from 668 BC to 627 BC. Following this the group attended Evensong at St Paul’s Cathedral, as part of which New Testament scholar Paula Gooder preached a wonderful sermon as she was installed as the Cathedral’s first lay Canon Chancellor. Special thanks go to the Tim Burke Memorial Trust whose support made the day possible, it was hugely appreciated by all who attended!