What was my favourite moment during this visit? Probably it was looking at Tatenda’s school report. Tatenda is a bright boy who was in a day school and doing badly. Trouble at home! So we moved him last year to a boarding school where he struggled for the first six months, unused to the standards. Suddenly this year he has got it! He is working hard, doing exceptionally well and feels really good about himself. The same story could be told of Anesu whose work has dramatically improved. In fact all our young people are doing better now than they were 6 months ago. I think this is partly because we have become more sensitive to their needs, providing them with group counselling and other kinds of support. As a reward we took them all to a small posh hotel built and owned once by the Courtaulds where they had Cokes and chips in a lovely environment. They were fascinated!

The country itself is in a dreadful state. There were demonstrations and constant rumblings while I was there. People are simply desperate with the further collapse of the economy. Everything waits on the departure of Mugabe but he is not going, or so he says. The drought has produced misery all over the country. CR managed to find £10,000 in a bank account and is spending it on providing a meal once a day for about 2,000 kids in the badly affected Shurugwi area. That not only averts hunger, but enables the kids to continue with their schooling, instead of dropping out through exhaustion. All that makes it more impressive that the schools are managing to keep going, some with quite a high standard of teaching. Our little trio at St Matthias, Tsonzo have all settled in well and are producing good results as well has being happy. Here are Rejoice, Tinotenda and Munashe. The boys have grown a lot too! 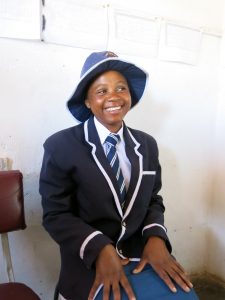 Despite our financial constraints we have taken on another girl with a traumatic background. This is Tinotenda’s sister, Nyasha, now in Sixth Form.

I could produce endless photos of our lovely children. However, our immediate challenge is to establish some of the boys who have left school without good results; they need projects that can support them in life. So Maphosa and Alban are about to start keeping 500 chickens. Gift Chigayigayi had a short placement with a motor mechanic and will start a mechanics course in January. Gift Ushe wants to get into farming projects and we are looking for ways of doing that. This is important for their self support, but also important for the country.

Those of you who are supporting us in Tariro are doing more good than you can imagine. Repairing human lives and bringing hope in a dark world.