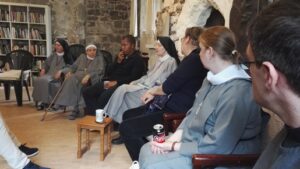 At the beginning of September, Fabian nCR and I were off on our travels once more – I’ve never gone south so much! This visit had us heading to the dreaming spires of Oxford with accommodation provided at the home of the Sisters of the Love of God, Fairacres. They are a delightful group of nuns with a welcoming, recently reordered chapel where we were readily invited into choir to share in the daily round of office and Eucharist.

As previously, novice turnout was good, with people from OSB, Mucknell, CHN, Derby, SSB, Southsea, SSM, and CR all represented. Our theme was ‘The Recovery of the Religious Life in Anglicanism,’ with the five wonderful days ably presided over by Dr Petà Dunstan of St John’s College, Cambridge. Petà is an historian with long specialism in the Religious Life. She has nothing less than an encyclopaedic knowledge, and is a charming person to boot. It has been about the third or fourth time she has conducted Anglican novices on a walking tour of key sites in the history of this way of life. Seemingly, Oxford and its environs are integral to our existence!

Certainly, it felt good to feel our connection with the likes of JH Newman, John Keble and Richard Meux Benson, whose visions and models for the life were all begun on the various sites we visited during the week. We saw Littlemore, where Newman founded his small collegial brotherhood in the Oxbridge style, the pulpit of St Mary the Virgin, from which Keble preached the famous Assize sermon in 1833 denouncing liberalism and appealing for a more ‘catholic’ attitude in the Church of England. It was also my first visit to St Stephen’s House, famous as the starting point of Fr Benson’s Society of St John the Evangelist. Living history indeed!

Fr Phil Ritchie (alumnus CoR) celebrated Mass for us on Wednesday in the Leper chapel at Bartlemas, from where Br Giles began his ministry to ‘wayfarers’.  This would eventually become the Society of St Francis in the 1930s, as the vision caught hold and the ministry spread. Giles himself has a difficult story, but we all felt his saintly presence in the gathering that afternoon, as Petà Dunstan spoke with a sincere passion for his life and vision. Her enthusiasm was joyous to receive.

Naturally, there were the socials and wine-tastings pertinent to these gatherings, and we all enjoyed catching up on news. CHN Derby has a postulant to be kept in our prayers, as soon does OHP, Whitby. Proof that the recovered Anglican religious life has that future into which we are all keen to invest. For my part, I have come away from this trip with an equal measure of hopefulness and knowledge. Thank you Petà: great stuff organising guardians!